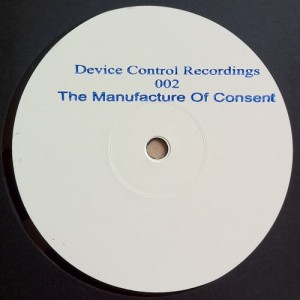 Colin Bain, the heart, mind and soul behind the Device Control alias and the self-titled label, clearly understands a thing about techno. After being quite impressed about the label’s potent debut in April last year, I find Device Control’s second four-tracker “The Manufacture Of Consent” even more appealing.

The EP, which will be part of my next vinyl order, is a premium offering of hot-blooded techno, filled with eruptive sequences and brazen rhythms. Occasionally, it recalls the 1990s strongholds, but the tracks sound fresh and animating.

The business starts when Hood-style steely swirl connects to furious kick drum in “First Bloc” and a wealth of bulldozing riffs give a strong rating to “Policies”.

Bain skilfully combines straight drum patterns with eerie echoes and acid fragments, applied with a striking effect in the volcanic title track “The Manufacture Of Consent”, which smells like a meet-up of Midwest hardcorps and Labworks posse from the bygone years. “Saturn Message” is the noisiest scramble, with tense loops and bruised vocals going closer to Repitch fare.

Although moving in sub-125 BPM spheres, Device Control 002 is about solid, crude techno without any industrial nonsense. Hopefully Bain does not need to move from ‘remote’ Scotland to Berlin for a greater recognition he really deserves.