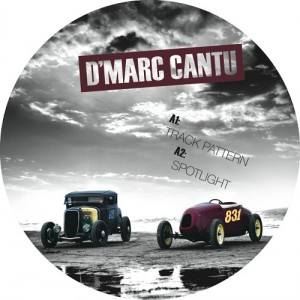 Ann Arbor, US state of Michigan, is less than one-hour drive from Detroit and the place D’Marc Cantu comes from. Despite of geographical proximity to the Motor City, Cantu has rather courted the sound of Chicago with his genuine jakbeat rebellion, heard on labels like Nation, Crème, Sequencias and many more. He also partners with JTC in the group AM/FM, recently hitting with rude acid tracks on “Doomsday Initiative I”.

The newest instalment of Cantu’s work comes on Tom Dicicco’s Run Out Run imprint, after a long wait since the November 2014, when the release was announced.

“Car Type EP” is a proof of Cantu’s versatile talent, in this particular case meaning less acid and a stronger affiliation with Detroit. Minimalism heads get served first with “Track Pattern”, clearly a Terrence Dixon inspired cut with atmospheric loops, snares and obscure mumbling. Of different breed is “Spotlight”, which would easily fit to DJ Sneak’s worldwide fame years and keeps the party mood with filtered disco house grooves over a vocal sample.

Opening the B-side, the ravey title track fuels the floor with hardened Moroder bass line, similar to acidified rawness of Blacknecks. “Iridescent Life” sees a return to the source, virtually deserving a graduation certificate from the Institute of Detroit Chords. Positive and thriving dream track making a nod to John Beltran and Carl Craig.