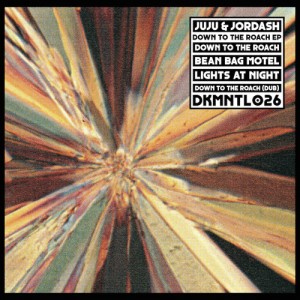 After the self-titled debut album in 2009, Juju & Jordash have stayed close to Dekmantel, a label in their chosen home Netherlands, where the Isreali-born producers also issued the next two longplayers, “Techno Primitivism” and “Clean-Cut”.

“Down To The Roach” is their new tool for the club use and it triggers many flashbacks. To start with, it’s wrong to assume that Roach and motel, seen in the track titles, refer to Heller & Farley who ran the Roach Motel project a couple of decades ago. Instead, the cuts look over the ocean, at the house tracks from around the Great Lakes.

The title tune is a casual (or Cajual) drum roller with high-pitched voice of a daydreamer, with audible parallels to Boo Williams and his “Old School Flavor”. Hitch-hiker jive “Bean Bag Motel” hits after the dissonant intro with ass-shaking repetitions and “Lights At Night” recall Gemini’s “Moment Of Insanity”, before the title’s dub version wraps it up.