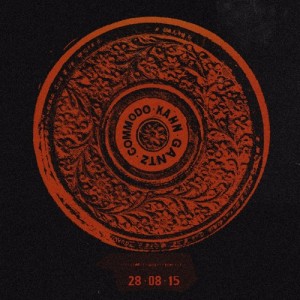 Dubstep and bass music has not caught much of my attention. Perhaps I missed the first wave of innovative productions and didn’t find excitement in later releases, when the genre moved closer to dance music’s mainstream.

However, my ignorance has neither been deliberate nor total because since Goth-Trad EP, I’m having a crush on one label, Deep Medi Musik. Being one of the genre’s best outlets, it’s renowned for many artistic endeavours of unreal dub-tinged bass.

Kahn has been ruling with recent delirious material like “Abattoir” and “Dread / Late Night Blues (Gorgon Sound Versions)” and has now joined fellow producers Commodo and Gantz for six tracks under the banner of “Volume 1”. Pressed in double vinyl, it contains about 24 minutes of music and offers a lot, when loaded riddims meet toxic folk themes inspired by the Middle East.

The highlight is “Amk”, where a sneering jinn becomes social between the walls of medina, the party proceeding with opiate Oriental horns and shuffling heavyweight bass. Faltering rhythms and dramatic female whispering keep the meditative mood in “So Familia”, while the wake-up call titled “Kibosh” invites to tango electronica and “Crystal Collect” is a showdown gruesome bass sequences and MC effects. A great match to “Amk” is provocatively titled “Bitchcraft” with tense strings and manic Ofra Haza-style vocal part and street cred anthem “Unmistakable” wraps it all up.

Dubstep trinity has completed an exceptional EP, which will embrace a community larger than the genre’s fans. Stream it in full here.