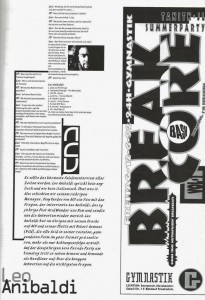 The foundations of the Techno Sound of Rome were laid by ACV Records that played an essential role in the first half of the 1990s. The label saw a number of international producers and DJs emerging, Leo Anibaldi being one of the main players along with Robert Armani, Paolo Zerletti, Riccardo Rocchi, Dave Clarke and others. Along numerous singles Anibaldi produced several fine albums like “Cannibald – The Virtual Language” and later “Void”, a peek to the experimental side on Rephlex. Anibaldi has remained active to the present day and his most recent EP “Evocation” with a Sebastian Mullaert remix came out last summer on his own Cannibald Records.

In 1992, he was interviewed by the German mag Frontpage and here’s a translation for English-speaking readers.

It was supposed to be the shortest phone interview in the history of the mankind.
Leo Anibaldi does not speak any English and nor we do Italian. That was it. Also we sent a fax with questions to his hard-working manager Tony Verde from ACV and he made an interview with Anibaldi, the 19 year old post-acid wonder from Rome, and returned the answers to us. By the way, Anibaldi’s tracks on ACV and the collab with Robert Armani (he’s on the article’s photo – Ed.), which all present the ’92 acid in its purest, most pumping format, are not the only highlights. In this year’s edition of the Love Parade Party, he’s among the headliners along with Armani and Armando. Here are brief answers to most important questions.

FP: When did you start as a DJ and producer?
Leo: When I was 15 and since two years I’ve been a producer.

FP: How did you meet Robert Armani?
Leo: At a rave in Rome.

FP: How did the cooperation go?
Leo: It was a very positive experience for me because the collab differed from the way I usually produce, it was rather a bit playful as Robert works very intuitively.

FP: Who are those you would like to work with?
Leo: It would be really interesting to do a record with an Italian DJ.

FP: How is your music called in Italy? Techno? Hardhouse? Post acid? Which of definitions do you prefer?
Leo: Post-acid, others are too worn out.

FP: Do you have some role models or favourites?
Leo: I like the stuff by Industrial Strength, Love Inc./Trance Atlantic a lot, and especially some German stuff from Berlino.

FP: In Germany, italo house has an image of mellow house music with piano and girl vocals. Do you see yourself as a rebel against this image?
Leo: Just wait till I come to Germany, then you will see …

FP: What are house capitals in Italy?
Leo: Rome and Anibal’s City.

FP: How is it the scene in Rome and how does it differ from the rest of Italy?
Leo: Currently Rome is the most avant-garde city and many DJs would like to be part of the Sound of Rome, which is evolving right now.

FP: What are your plans in the moment?
Leo: My plan is always my music. I would like to bring it to the level that Jim Morrison had in the 60s/70s. This is cult music the people can identify themselves with. Even when some people are pushing a commercial direction, I will never compromise.

* Anibaldi’s TOP 10 notes were quite sketchy and I added Discogs links for (presumably) correct titles. For Detroit’s Hard Wax it was impossible to identify the title.