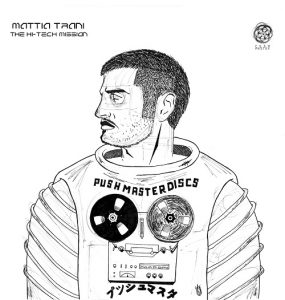 Mattia Trani could be someone who decorated his teenage room with Transmat and Underground Resistance memorabilia and even if it was not true, his recent affiliation with Detroit-bred artists is remarkable. Several Motor City legends, such as Juan Atkins, DJ Stingray, Claude Young, Orlando Voorn, have provided remix assistance to the talented Italian, in the EPs like “313 Times”, “Over The Future”, etc. and in 2014, Trani was the first Italian DJ to make a podcast for UR.

In the debut album, Trani is clearly under the strong influence of innovators, expressing his admiration with strong Detroit symbols both in the production and the LP’s identity (just think of track titles). By the familiarity of the sound, this is a tribute album which makes difficult to perceive how much there’s Trani’s own self behind the tunes.

Still “Hi-Tech Mission”, released on Trani’s own Bologna-based Pushmaster Discs imprint, contains a few memorable tracks, like “Traffic 2 Traffic” where drum’n’bass riffs are mixed with keyboard etudes. The title tune “The Hi-Tech Mission” is a genuine Detroiter and piano is lending jazzy notes to neat “Symphony Of A Cosmic Goddess”. “Metaphysic State”, alluding to K-1, is a well-accomplished Direct Beat-style electro cut I would loved to hear more in the album and for the end junglist vibes reappear in the UK hardcore offspring “Future Funk Return”. Of other tracks, “The Detroit Student” and “Alien Pattern” are reminding of Black Nation and Axis output, but are less appealing along the weary “Low-Tech Descending”.