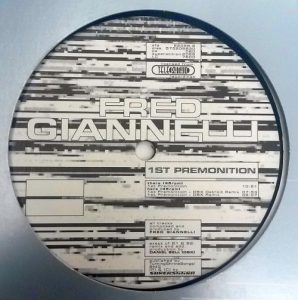 By 12th August of 1996, when Superstition Records issued “1st Premonition”, Fred Giannelli didn’t need any introduction anymore. After touring with the proto-industrial group Psychic TV in the 1980s, Giannelli moved on to electronic dance sector and adapted a number of monikers, such as The Kooky (or Cranky) Scientist, Mazdaratti and released with Richie Hawtin as Spawn, becoming a core artist of the pioneering Plus 8 imprint. Giannelli’s own Telepathic Recordings launched in Boston in 1992 and folded in 2001 with The Kinky Scientist single “Mid-Life Crisis” (perhaps it was a true story?). One of Giannelli’s albums, “Telepathic Romance”, appeared on the Finnish minimalism outpost Sähkö.

The A-side’s original of the “1st Premonition” is a scintillating and acid-bolstered track that dips into the foam bath of subtle acid house and bears the gleam of strings of life. With over ten minutes of playtime, it affirms Giannelli’s preference for stretched-out tracks. As much as the single belonged to Giannelli, it did to Daniel Bell who contributed with two reworks on the flip. “DBX Detroit Remix” would please Motor City puritans with classic (techno) house chords while “DBX Remix” reaches back to Bell’s most brilliant moments, offering crisp, bass-heavy minimalism that is smoothened by floral pads.

Although there is certain ‘trance’ angle in Giannelli’s music, it was a surprise to see him associated with Superstition, which roster included Oliver Lieb, Mijk van Dijk, Marmion, Jens and other proponents of energetic hard trance sound. Still Giannelli released a couple of singles and two anthologies on the Hamburg-based label that was run by the local DJ Tobias Lampe and Marc Chung, former bassist at Einstürzende Neubauten.