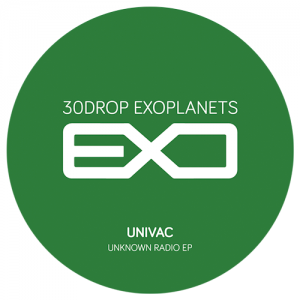 The title track “Unknown Radio” is a definition of big room electro, written for catering the dancefloor with swerving bass lines and chunky stabs, while the lights are dimmed in “Lunik”, built on Psi49net reminiscent electric pulsations and robo voices. Then a special guest opens the B-side when Der Zyklus turns “Lunik” to a beatless suite, elegantly hovering in higher spheres, before cold groove returns in “Null” and “Zener”, the EPs most technoid track.

“Unknown Radio EP” belongs to ExoPlanets series of 30drop Records, a Spanish imprint launched in 2014 by 30drop for his own techno productions. For ExoPlanets, the horizon has been expanded with guest appearances by Terrence Dixon as Population One, The Entity and ORYX9.