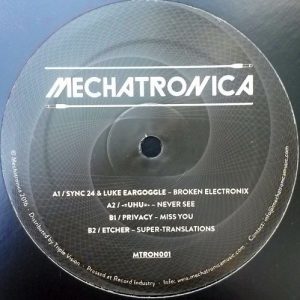 Mechatronica, a new label among the dozens that have sprung from Berlin, arrives with impressive mini-compilation full of underground electro magic. Mechatronica’s foundations reach back to the year 2012 when Italian DJ Federico Benedetti (ElectroDon) and Chilean artist Daniel Boubet (Trippy-H / Daribone), both later joined by the Danish DJ MEJLE, set up a music and party-promoting collective. Their events have attracted several famed electro purveyors, recent headliners being Rude 66, Morphology, Rutherford, etc.

Thus the label launch is not surprising and the debut has all the ingredients of obsession, only when we take “Broken Electronix” by Sync 24 & Luke Eargoggle, an electro track close to perfection. Fireball sequences collide with icy robo voice in a showdown of strength and vigour in the first-time collaboration of producers from London and Gothenburg.

Vox-driven escapades continue in “Never Seen” by -=UHU=-, a project of the Latvian Gatis Pastars, who unites female vocals recalling Dopplereffekt’s naughty side and Ersatz Audio’s soundclashes. The B-side rises above the earth when Privacy‘s astral electro “Miss U” follows the luminosity of Model 500 kind, expressed by slightly sentimental, blossoming pads while cheerful funk “Super-translations” by another Swede Etcher would set the mood right for a paragliding session.

P.S.: Now when I’ve completed my post, it’s time to proceed to a review by Pattern Burst.