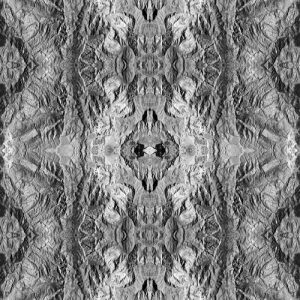 Ethnic music has served as a source of inspiration for many artists and when speaking about Arabic flavour in electronica, the most merited producer might have been late Bryn Jones aka Muslimgauze. Radical both in his pro-Arabic views and sound writing, Jones contributed to the evolution of a particular subgenre without targeting too clearly the dance nation.

Merging Oriental influences with synthetic beats is not a formula of success itself, because it requires creativeness and insight that is now available from Ian McDonnell aka Eomac, also known as one half of the Irish duo Lakker.

The author of several notable tracks in recent years (my favourite is a remix on Ressort Imprint), Eomac is primarily a dance producer but except for a few passages the album „Bedouin Trax“, released by the acclaimed United Arab Emirates label Bedouin Records, is mostly meditative and curious for experimenting without any New Age hullabaloo.

Eomac is exposing the persuasive effect of Arabian voices, often in a modified and processed form that makes hard to guess the origins. The colours, tastes, smells of the Islamic belt are brought together to a musical mosaic is complemented with bits of (European) electronics from the hand of Eomac who is acting as a real composer rather than ‘a producer’.

Modern-meets-traditional soundscapes range from tranquil ambient pieces to more electronic tracks with uptempo gusts with accentuated percussion across the album. The intensity is perceived already in the first moments of “Entrance”, which takes off with penetrative drums and heartbroken yell. Oriental strings are spreading the wings in “Ascension”, gliding in entrancing manner over the rose gardens.

“Toward An Entity Of Oneness” is one of the highlights, a repetitive snake charmer piece with hollow drums and trancy subtext with powerful vocal passages and “Oasis” reminds for some reason of Thomas Fehlmann’s “Good Fridge” material. “Incantation” is another attempt with processed voices and stepping beats, growing to a Dervish dash that would sound good in a +8 pitch mode.

Drums play the key role in “Gather To Move, Gather To Live, Gather To Be” with scorching stabs and abstract background chant, slightly reminding of Nation Records artists such as Fun-Da-Mental and Recycler, and thin sound picture of symphonic “Jani Mun” concludes the journey.

With charming mix of voices and percussion, Eomac takes us to a deli of audible goods and manages to keep a style which is distinctive enough. If I were an electronic music artist, “Bedouin Trax” is exactly an album I would have liked to produce myself. In my ears, it’s a strong contender for the best longplayer of 2016.

Eomac’s new plans include the launch of his own Eotrax label, the first release being a single-sided twelve with an eleven-minute grubby track “Temple Of The Jaguar” by the man himself.