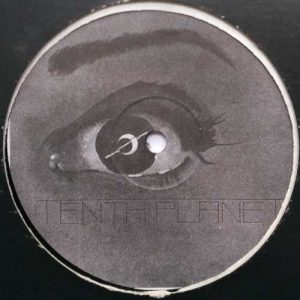 Insync Vs Mysteron was a nineties project that saw three British musicians collaborating on various occasions, including the album “Android Architect” (1997) and a few EPs on their own 10th Planet imprint, as well as on the labels such as Plink Plonk, Peacefrog, Fat Cat.

Lee Purkis was doing the In Sync part and Mysteron consisted of Chris Hartley and David Manuel. Their active period lasted up to the year 1997 when both 10th Planet and the collabs were shut down. Almost a decade later Purkis, one of the original members of the famed Fat Cat record shop, returned with a new label Fortune8 for a few busy years.

Insync Vs Mysteron can be mentioned in the same breath with The Black Dog, B12, Kirk Degiorgio and other contemporaries in the UK’s intelligent techno community. Their 1994 debut on 10th Planet reflected the funky deepness of the era, the opener “Transform” being a good example. “Froglocker” feels comfortable as a sibling of early UK hardcore, with 303 bursts on breakbeats. The B-side brings the BPMs over 140 in the minimalist Detroit mover “Last Outing” before punishing “Redrain” sweeps across the lands without sacrificing the deep techno attitude.