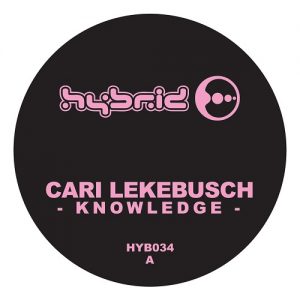 Cari Lekebusch from Stockholm is a true electronic music veteran whose first tape experiments appeared thirty years ago. Gradually he became an international techno producer with countless aliases and also managed to belong to Harthouse roster, recording under the name of Braincell several EPs for the hard trance flagship. However, Lekebusch was primarily a driving force of the nineties Swedish techno community, along with Jesper Dahlbäck, Joel Mull, fledgling Adam Beyer and others.

The producer with German and Finnish roots has actually kept going ever since, running his own H. Productions (the successor of the label Hybrid) and has completed a respectable amount of releases to date. This year Lekebusch has reached a new plateau in terms of quantity and now shows decent form with “Knowledge” on his home label.

The twelve is a splattered pink & black addition to the label’s Full Spectrum series. A different-colour concept is not new to electronic music – if to think of Wolfgang Voigt’s Studio 1 project or Donnacha Costello’s “Color Series” – and has rather a secondary meaning here. But music-wise, Lekebusch deserves credit with two simply built and functional tracks where main motives are extended to a length of about eight minutes in both. My vote goes to the A-side’s steadfast stomper “Una” that reminds of Ian Pooley’s Silvershower project. On the other side, jingly and bass-heavy “Anu” comes with obscured vocal sample and is similarly a good choice for DJ bags.