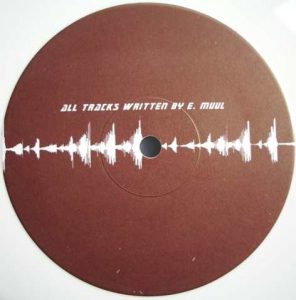 If Dutch music writer Erik Müller aka E. Muul does not sound familiar, his Tintin-inspired alias Haddock & Müller may well do because it’s credited as the producer of fabulous cosmic electro conceived in the last decade by Freak Electrique (“P.H.A.S.E.R.”) for Viewlexx.

For getting terminally lost in the alias jungle, let’s bring up Müller’s Perfect Sync project that released in mid-nineties three twelves on the Dutch label Evidance. The first single “Down The Deep / Body Slam” ranged from decent Detroit influenced techno to acid house and the second seemed to follow the same direction. The final one, 180 gram white vinyl from 1996, turned out as a rather special piece of electric beats.

“Man Song” is a warm and sentimental opener with beautiful strings and despite of the title, “Hostile Vibrations” is another smooth ride with dancehall vocal samples. The B-side is dedicated to one electro-flavoured theme, starting with downtempo star gazing “Electronic Sweets” with vocoded repetitive voices. Based on the same track are two extras, the first “Bonus Beats” falling to softer dreams while the second take is loaded with intrusive bass sequence.