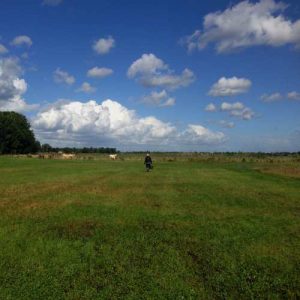 In 2016, New York Haunted released Biosphere’s four-tracker “Hilvarenbeek”, which turned into an unfortunate incident when the artist deemed the release unofficial and asked to withdraw it from the market. Now the material, recorded during the Incubate festival in 2013, received the green light as a full-length on Biosphere’s own label Biophon.

The album’s eight tracks fruited from Biosphere’s hands-on experience in the Dutch countryside, when he captured forest voices and agricultural ambience at the organic farm Bioboerderij ‘t Schop in Hilvarenbeek. Electronica is entangled in field recordings where one can intercept air traffic noises, tweeting birds, mooing bovines (“t’Schop”) and a farmer’s commanding voice. Four siblings (“Audax”, “Rovertse Heide”, “Hilsondis” and “Icoon”) share a recurring theme across the album, conducting experiments with phonation on flowing drones and subdued percussion, while the presence of natural voices from bats (“Pipistrellus”) and owls (“Strigiformes) underlines the album’s back-to-the-nature atmosphere. And before hearing “De Doornboom” I could only remotely imagine the musical potential of a windmill, but it’s a great instrument for producing mechanical, repetitive sounds.

Biosphere boasts an experience of over three decades in the music-making. In the mid-eighties Geir Jenssen released the debut cassette as E-Man and became a member in the dark synth group Bel Canto in his native Norway. Being a fan of acts like New Order or Depeche Mode, his subsequent move to the electronic productions was not unexpected. Under the Biosphere alias he released in 1991 much-acclaimed album “Microgravity” – which was in 2015 reissued by the artist’s own Biophon Records – and later the Norwegian became a regular producer for the UK’s Touch.