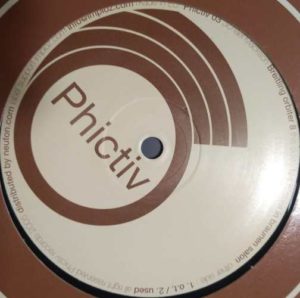 Now and then I tend to spin a record from the better end of the mid-2000s minimal, from the time when the genre flooded many European countries and raised questions about electronic music’s health. But there are fond memories from this period too, one of those being “Breitling Orbiter 8”, already mentioned among my favourites of 2005.

The three-tracker belonged to the early production phase of the German artist Boris Steffen, who never achieved a commercial deal with a Swiss watchmaker – most likely wasn’t looking for it either -, but can be called a minimal don without any irony. As well didn’t he have any direct relations to the King of Pop and we don’t know what did Michael Jackson, who would have celebrated his 60th birthday today, think about the artistic anagram.

Speaking of the music, the release on Phictiv – a Swiss label that disappeared about ten years ago – is worth remembering already for the ultra-long A-side. The big one is titled “Tee trinken in braunen Salon”, a dubbed out undulation of about 20 minutes where floating passages are overrun by caustic waves, for alternate moods during a tea-drinking ritual. On the flip, “O.T.” relies on more complicated patterns, acid house thrusts finding a good company in Boogizm-type abstract funk. The last one, “Used”, returns to the basics of the opener, offering 11 minutes of dub’n’bass fix and murmurs of lost souls for the techno floor.

I haven’t followed Steffen’s later efforts, but his discography as Jichael Mackson extends to this year, with a release on the Hungarian label akkult, after having previously appeared on labels such as Hartchef Discogs, Illian Tape or liebe*detail.