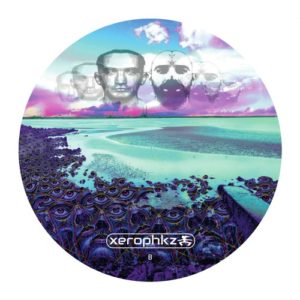 Real deals with a barbarian touch

One has to be careful for not missing Xerophkz’s output, because of the one-record-per-year publishing pace, the Dublin label may get lost in the mass of new music. But it shouldn’t. Having discovered it rather late – the last year’s “Underground Psychosis”, which may serve well as a substitute for non-existing new releases from UR – the label immediately became a revelation for me. After a jump to the fellow Lunar Disko base, the label boss Conan_ is now back on the home turf and in cooperation Pineal Navigation, a new player from Dublin’s local scene, cements Xerophkz’s position among most exciting labels of our days.

Even when “Subatomic Collision” borrows from the history books and doesn’t produce sounds-never-heard, all elements mix up into an immersive experience. About 30 minutes of playtime of this almost-mini-LP offer plenty of substance and variety. Acid breaks of Pineal Navigation’s “Zealous” smell after Murdercapital’s basements and electro boom, but the opener is a believer and not a hipster. To the same theme belongs “Outside Terrestrial”, offering a majestic view to a giant vessel gliding into caustic vapours, but chiming arpeggios of “Morning Prayers” are painting a different picture, about one-way-ticket folks worshipping the Goa gods at the Indian Ocean.

Conan_’s sluggish braindance kicks in “Dark Power” emerge from the depths of modular mind, before the arrival of an absolute killer track – and I rarely say ‘killer’ – “Space Gang”. It’s a Zhark-ish grandson of retired hardcore corps with chopping, shrill synths and frantic Industrial Strength bass, turning charmingly nasty at the mid-track.  Starting with a shredded bass line, “End Of Species” is an agile chord-driven tune with caustic elements, underwater sonars tracking the pod of dolphins in warm waters.