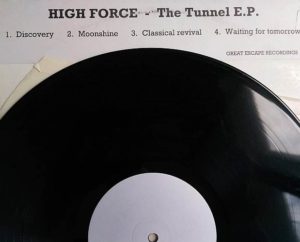 The release is probably from 1993 or 1994, when hard trance was still in a dominant position in Germany, with Harthouse pictured in the middle and flanked by labels such as 23 Frankfurt, Delirium, Superstition, Plastic City and many others. The scene dished out an enormous amount of twelves that can be still found in bargain bins, as I recently experienced at Frankfurt’s City Beat Records.

This is a real dusted off release because after trying to sell it for €5 many years ago, I had moved it to my collection’s back row. Over the time it hasn’t become much more spectacular but what makes it interesting is the fact that both for the High Force project and Great Escape Recordings it was the sole appearance, if to believe Discogs. I also don’t have any clue who is behind the EP, my guesses going towards the Hamburg scene.

At first sight it seems to offer plenty of tracks but actually it’s a four-piece twelve with same titles pressed on both sides. “Discovery” sticks to trance’s basics with gentle layers and 303 gusts, which are switching to fast lane in “Moonshine”. The other two tracks are more appealing, both “Classical Revival” and “Waiting For Tomorrow” keeping dreamy atmosphere with hints of classic techno.