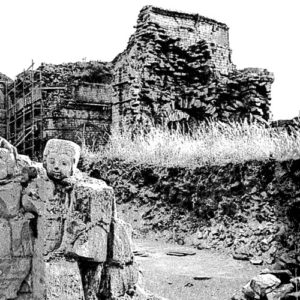 Harmonious Thelonious is a tour guide to the amazing world of native polyrhythms, steering a perpetual percussion machine to exciting locations around the globe. In a new expedition for London’s The Trilogy Tapes, Middle East serves as a source of inspiration for Stefan Schwander’s project that is able to impress after many active years.

With lulling Oriental strings and swaying percussion, “Women’s Chorus From The Region Of …” is for admiring the vastness of dunes from a stretched out caravan carrying nuts and honey to the next oasis, while saxed-up “Halb Ding” welcomes a casual jazz invasion on familiar drum patterns.

My favourite tracks are on the B-side (again), both built on subtle beats. First, philosophers congregate in a mountain village, following the call of “Delusion (Version II)”. That’s hypnosis-inducing ambient the Harmonious Thelonious way, with a wealth of claps and vibrations in anticipation of floor-sweeping beat kicking in, which doesn’t happen. When I bagged the vinyl release, the B2 track “Unidentified Soundtrack” felt the strongest and it’s a decent piece embracing the shores of Bosphorus both on the European and Asian side, with jazz bar vibes complementing entrancing Oriental strings.

Not surprisingly, The Trilogy Tapes is having another busy year. After “Samba”, a wonderful house single from Alex aka Baba Stiltz, and FFT’s “Regional Loss”, Ondo Fudd’s third release has landed recently on Will Bankhead’s label.