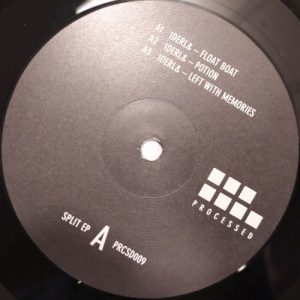 Margus Löve launched the Processed imprint ten years ago in Tallinn and marks the anniversary with a various artists EP. The A-side belongs to Löve’s own 1DERL& alias, the first two tracks picked from the CD album “Reflection” (2012). “Float Boat” is on a par with mid-paced funk of Vogel and Begg, episodically distracted by percussive tempest and narrowly missing the ‘industrial’ tag. “Potion” is aligned with dub techno’s milder end and runs on a smooth groove, which reminds of Traum Schallplatten sound, followed by ambient and drone study with bass edge (“Left With Memories”).

The B-side offers exciting discoveries when fellow Estonians debut with ruptured dub techno sessions. “Structure 576” is written by Fractal Elements (Ergo Loorits and Siim Leetberg) and challenges the linear flow of classic dub techno with an adventurous post-minimal grinder, clocking in at almost ten minutes. “Inside The Fusion” by Leetberg’s solo project as Steve Rig sticks to the 120 BPM with winding, knobby textures, which sound like Porter Ricks in a playful mood.

Löve, who runs mixing and mastering studio Sudu in Tallinn, has pursued many electronic genres throughout his career, from dubstep to ambient. His latest solo release was the album “Immerse” in 2018, by the Exit Safe Mode, Löve’s other imprint that is a techno focused platform for projects under the same name.