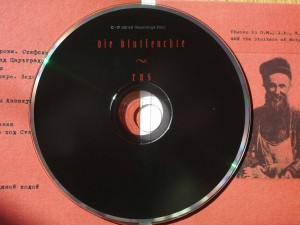 Anatoli Alexandrovich, whoever he is, made this album in 2002. A musical insight into the more or less glorious days of the Russia’s history, painted with minimal and noise-influenced experimental compositions and spiced with sound fragments like worshipping of Stalin in Finnish-language, Karelian folk song and clinking of swords. “Спутник” is a track for the floor that reminds of Sähkö’s rhythmic and acidic output of the early days. Late Leonid Iliych Brezhnev is the MC in ambientish “Скрытая Война I” while “Скрытая Война II” is a mind-blowing noise avalanche. “Гласность” stands out nicely with guitar riffs. “Курск. Крещеный Ледяной Водой” is an oppressive minimalistic journey at the Barents Sea that turns gradually into “Kalinka”. As a whole “RUS” is an ample harvest of experimental sounds and serves well as a soundtrack for the train travel bound from Helsinki or Tallinn to St Petersburg.