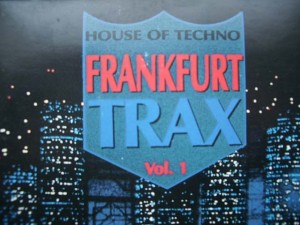 In the beginning of 1990s, a hardcore techno factory was based in Frankfurt am Main (FFM) and from its conveyors a lot of brain-drilling trax from dozens of artists hit the floors. It was revealed only later that one man, Marc Trauner, was behind of most monikers and in addition to producing he was utterly busy in inventing new and new label and artist names. PCP (Planet Core Productions) was the base of the hardcore.

About same time a wave of hard trance swept across Germany, and although the PCP and Harthouse releases, for example, were different like day and night, still some trance gurus like Sven Väth and DJ Dag found their way to the PCP roster.

This one is the first in the legendary Frankfurt Trax series that suffered a loss in quality in later instalments, when it was already issued under Sony. In the first edition, the PCP crew is still seeking its own style and combines industrial and hip hop influences. The best is saved for the last when Tres Hombres and Free Base Factory present two bonus tracks that are real FFM ghetto hip-hop joints. Recorded live in the seminal Cooky’s club, with primitive equipment and ignorant sound engineer, I imagine. A very energetic lo-fi stuff that reminds of Public Enemy.