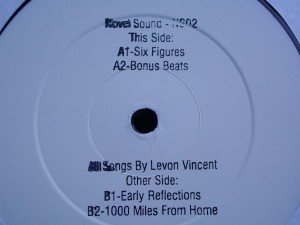 The title track is an endless one-groove house piece, short of any character and also the following “Bonus Beats” on the A-side does not turn things much better. You can draw some parallels with STL but the latter is a clear winner of this comparison. B-side rolls along in dub techno moods and alerts you more – despite of millions of alike-sounding productions. “1000 Miles From Home” concludes the story here and as a nice surprise sounds pretty good and flirts with an old organ. Well, the record, released in January 2009, is not a total waste but can’t imagine it making any DJ charts. I guess L. Vincent has done much better than this.