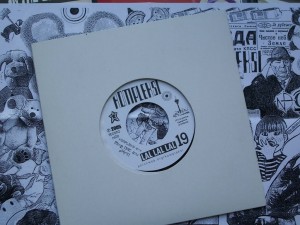 Definitely, the singer was not a choir boy of merit. Especially on “Lovechild” carrying a tune is a real challenge for him – but it could be just a clever disguise to keep this seven-inch as weird as possible. Because the guy doing the vocal part is Erkki Rautio AKA pHinn, an instigator of the Finnish electronic music scene and founder of PhinnWEB with Kompleksi being this website’s “house band”. “Lovechild” is like early-morning karaoke after a heavy night in the bar where only the boldest, and not necessarily the most beautiful, have survived. “Moscow Nineteen Eighty” is a bombastic and nicely rolling electro track for those who remember the first Olympic Games held in the Eastern Bloc, and the friendly bear Миша. The vocal and lyrics are as silly as on the flip but you just have to live with Finnish humor.