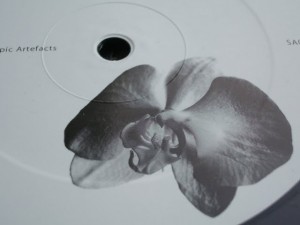 Luke Slater, techno man in business for almost 20 years, puts his remixing hands on the track called “Gmork” and does it with passion. Definitely he returns to his roots here with a solid floor stuff and we can forgive him diversions to average-sounding breaks and electro productions (“Wireless”, 1999). Slater is back and delivers an impressive remix where he sends furious ravens to scream around a deserted factory. The track is so many-faceted, like a medley that recalls best sounds of Slater’s career and adds some new.
Dadub’s version of “So The Nothing Grows Stronger” is dubby and energetic bearing some Caribbean feel and driving on distorted vocals. It’s not an overproduced dub techno piece but still spheric and let’s you breathe. A promising break in the middle goes over to a more technoid passage and heavy drums appear before the track ends. Not bad at all and both sides would serve well on the floor.