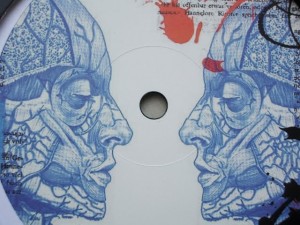 A drop-dead serious session by Rohr and Schoenemann, and by their remixing friends. It’s music of November, sounding like the moments when you have stayed inside and hear whirlwind trying to unroof your den. And the weather forecast tells it will not be any better.
The original is a creeping and slowly pulsating wall of sound that is built around one central sequence. Metalogic’s dark and trippy remix reminds in some parts of “Times Fade” by Phuture The Next Generation. On the B1 a remix by Alland Byallo who raises the tempo in a version with unoriginal dub techno sounds that make it clearly the weakest link here, despite of deformed voice effects. “Stovepipe (Perc Vs. Metalogic Remix)” bulldozes over everything it meets, with metallic drum patterns and discreet acid lines, though maintaining modest speed. Put on 45rpm to catch a more ravey version.
At first sound it may feel like an average production by another German label. I’m happy to learn that Schoenemann is still well-placed and has with Rohr delivered a decent release. Recommended.