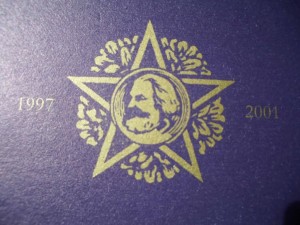 The website of now defunct Lux Nigra featured jolly commercial spots from Japan and the label in general seemed to be addicted to the country of the Rising Sun. For Karl-Marx-Stadt as such the sun has gone down because the city in the Eastern part of Germany is called Chemnitz nowadays.

It was in 2001 when Christian Gierden put together a tolerance test in the form of a versatile mini-LP. On the A-side “Test Object” kicks off as random dreamy electronica but then wild breakbeats take the control. “011000” is a soft interlude before “Vgamz” intrudes, with a mix of UK and Teutonic hardcore that signs off with a melodic Atari-like sound after frantic analog massacre. “Nowhere At Home” is plain techno for the floor.

B-side launches with “Nsk2.Sqids”, where poker face electronica morphs into hectic woodpecker disco and pitched ragga shouts. “Moonie Moonstone” has synths and cembalo, followed by the most insane exercise: A screaming Japanese folk singer opens “Optime Prior”, then flooded with ugly gabber. Female vocals soften a bit “Theorie Und Praxis” that is heavier bass-laden electro hop. Quite a rollercoaster.