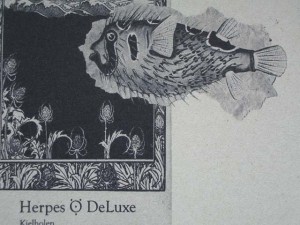 No cheese and chocolate from Switzerland but glowing steel and whispering elves in the first release of Hinterzimmer Records. Label founders Reto Mäder and Roger Ziegler have teamed up with turntable instrumentalist Christoph Hess (Strotter Inst.) and two other performers, to produce an album for advanced listening and darker dancefloors.
An irritating wake-up clock introduces “Fern der Hoffnung” that develops into a hypnotically crawling esoteric track spiced with eco-friendly narration and metronomic drum beat. Raindrops and orchestral sound samples set the tone in “Funkenflug”, a calm composition before most intense “Tief Unten” unleashes a psychedelic mayhem of distortion, with Strotter Inst.’s turntable experiments feeling in the bone marrow. Feels like trapped in the mine, deep under the surface and the only companion being a manically-sounding compressor drill.
The rage is over in “Ruhig stellen” that plays with human voice samples and sound snippets in an experimental vein, as does “Im Moos” – both are in-depth explorations of sound. “Boiled Rice” is a minimalist composition that bears the vastness of cosmos with weak signals intercepted from a long-lost spaceship. “Nichtsdestotrotz” is almost inaudible during the first minute but then a weak hiss is covered by upbuilding abstract noise and creeping drone. Impressive.