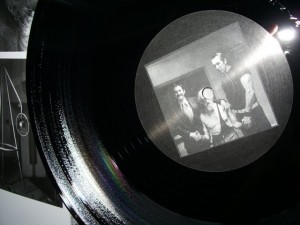 Cologne Tape is an orchestra consisting of no less than eleven people. Including Jörg Burger who has worked under aliases like Bionaut, Modernist, to name a few, and gone a long way in making Cologne an electronic music power center. In the new group has been joined by producers behind the projects like Ada, Popnoname, The Field and others.

All tracks are just called “Render” and numbered from one to five. The intro-like opener is a crash of massive bass effects, hollow percussion experiments and haunting voices, all thrown into the same pot and alerting the listener to what’s coming. “Render 2 (Magazine Edit)” drives across the valleys and forests of beautiful Germany in a slight house mood, assisted by bass guitar and “Autobahn”-like synthesizer chords. Flute before the end is unmistakably a greeting from the 70’s.

B-side opens with “Render 3”, a short psychedelic bass-backed gallop with hazy and stoned voices in the background. Number four kicks off like an introvert synth session with xylophone groove and twisted keyboards, but once the beat is released it develops into a colorful contemporary house track. By the end you are encircled by a swarm of sounds. “Render 5” is a pure extended krautrock madness of over 11 minutes, a somnambulist hymn with reverse voices added.

The mini-LP of over 30 minutes does not only recycle old krautrock and Kraftwerk ideas, but also adds achievements of electronic music in recent 20 years. Definitely this record is a result of profound planning and engineering, and not of one occasional afternoon in the soundproof bedroom. Almost perfect.