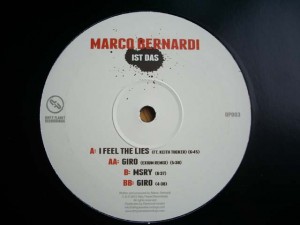 Prepare yourself for a ride. “I Feel The Lies” flies with time machine to the days of acid house. True to best traditions of 80’s Chicago, the track spins around bubbling sounds and thumping beats, with the vocal part done by electro legend Keith Tucker. Cool, Aux 88 front man in a totally new role.
Exium has mastered a remix of “Giro”, delivering thus the best techno track of 2010, in my humble opinion. Millsian jingles and darkly pounding four-to-the-floor arrangement is exceptionally good. Exium’s 2006 release “Unemotional” was my first encounter with the Spaniards – those who have not yet discovered them, it’s about time.
“Msry” is, again, a different story: Slightly shuffling and smoother than preceding tracks, built on harmony of chords and strings, but with technoid backdrop and flying grooves. Lovely and full of force. The original of “Giro” is cosmic electro with singing synths and a robotic voice revealing the soul of machines. An intense lead-out.
The record is so multi-faced that sounds like a “Various Artists” release. Well, the man from Glasgow has enjoyed Tucker’s and Exium’s company, but it’s still his creation. Not a single second of boredom comes up here, just excellent!