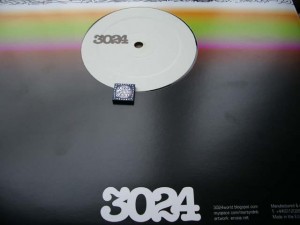 ‘It’s brilliant’, have all smart guys have known since January 2010 when this release came out with two reworks of “Is This Insanity?”, the first track of Martyn’s album “Great Lengths”.

And yes, this twelve is insane. First we find ourselves in a state of vacuum where clonking and creaking beats are the only companions till Spaceape enters the stage with suggestive voice to grab all attention.

Spaceape’s qualities are just amazing and if nobody should say he’s mimicking Maxi Jazz of Faithless. Without the narration, the Ben Klock remix would have been a well-working but quite ordinary techno track. Now the best ingredients of the original have been crystallised into the remix of the year. On the B-side, Illum Sphere’s workout of “Brilliant Orange” is floating dubstep electronica, a nice one too. Worth checking is also another record of Martyn’s remixes, done by Zomby and Redshape.

In 2015, the 3024 decided to make a reissue with the original, Klock remix and “Camberwell Green”, another track by Martyn.