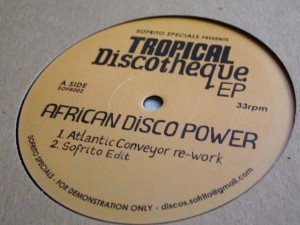 The heat is on at Sofrito; after vintage afro club funk of “Soweto Disco” they come with a 2010 repress of “Tropical Discotheque EP”, carrying the same power and emotion as known from Sofrito’s previous releases. No artist credits but four edits or reworks of thriving floor tracks: A-side is filled with two quite similar versions of “African Disco Power”, with male vocal backing. On the B-side tempo is reduced in Caribbean-sounding “Calypso Path”, while “Disco La Calle” goes a bit cosmic, being the best track of the EP.