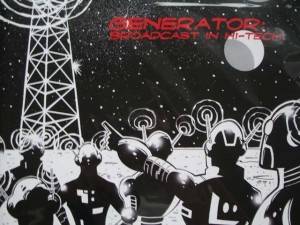 After a hiatus of almost 15 years, if not to count some occasional releases, Detroit’s Generator Records is trying a new push. The label presents a compilation that contains both seasoned and rookie producers. In total eight tracks of tech house mainly, with some deviations to harder or jazzier sides.

A tougher start when Abstract Science (“The Grinder”) debuts with a brave techno groover, followed by Andy Rantzen‘s (“The Kiss”) commonplace tech-house with jazzy angle.
The label boss Alan Oldham does his part, in addition to sleeve illustrations, under the banner of T-1000 with chords driven tech-house (“Detroitism”). Terrence Dixon, master of minimalism and monotony, drops sure-handed loops on heavy bass in “Daily Routine” for the best track here.

Obsolete Music Theory‘s track (“Past Virtue”) is medium-paced shuffling techno like from the funkier part of Detroit’s textbook. Plural (“07”) goes off intensely and then turns into a deep house cut. Jamal M. (“Fine And Mellow”) drops his trademark quirky, filtered funk with slight late-night house feel and Windimoto (“Friday Night: UBQ”) is also among the new ones, doing easy tech-house for the end.

The compilation has a great significance for keeping the Detroit spirit alive but does not offer any sensations artistically. Though it’s a solid package with a few highlights and worth to find a place in your record case.