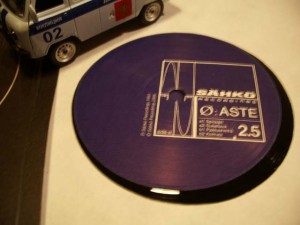 Before we go, I need a letter that’s not in the keyboard. After selecting Insert and then Symbol it’s ready. Ø like Danish physicist Ørsted who in 1825 was the first to produce aluminium. A symbolic fact because Ø or Mika Vainio is of pure metal.

Two good reasons to start the new year with this release. Firstly, I’m obsessed with alien sound experiments by Sähko; secondly, it’s recorded in Turku, European Capital of Culture along with Tallinn this year. All the work is done in 1992-93 but the record hit the stores in 2006.

The sound of Sähkö’s earlier days can’t be missed here. “Aste” is quite close to be a techno record, and not so experimental compared to Vainio’s and Ilpo Väisänen’s output as Pan Sonic (or Panasonic until they were legally harassed by a electronics company of the same name). It kicks off with “Spiraalit”, good for conquering techno floors. Minimal “Maan Valossa” features the theme of Yuri Gagarin, first man in space. Wall-shaking low frequencies and heavy bass can be found on “Sukeltava” and “Siimes” and other four tracks round off a solid package.

In 1970’s Americans sent Voyager spacecrafts to seek for the encounters of the third kind. On board were Golden Records, carrying information about the life on Earth. If they would do it again the works of  Ø should be there, for facilitating contacts with anybody who might be out there.