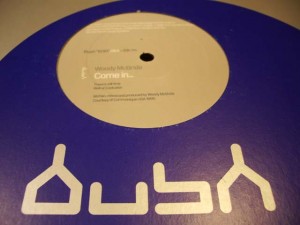 Paris, April 1996. I had entered the Techno Import store where the guys at the counter were busy testing the sound system with a track that hit me immediately. ‘C’est Woody McBride’, I was told.  Years after that moment I still think “Come In…” is among the very best McBride has offered during his long and prolific career.

Not a typical 303-driven release, “Come In…” is a terrific example how the man in the frontline of acid techno controlled the machines. The A-side has two medium-paced cuts, starting with acid house burner “Let’s Get Freaky”. On the flip, roughness comes up in “Wall Of Confusion”, a devastating attack of killer bees.