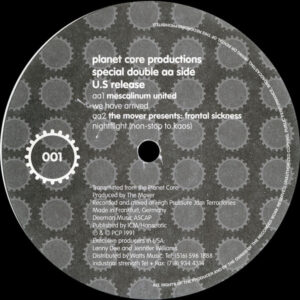 It was the day when Mescalinum United gave birth to hardcore. With its devastating nature the track literally manifested the arrival of techno’s new brutal face. Like a whirlwind it swept over the skyscrapers of Frankfurt and introduced the world to the joys of massive kick drum.
The intro of “We Have Arrived” heralds a mayhem and all obsessed HC fans know what follows. It does not aim at becoming beats-per-minute champion but the track with strong industrial influence carries immense power. In the wake of 1990’s it ruled the scene along with other output by PCP for the Hall Of Fame of HC. Was later remixed by Aphex Twin, among others. Ein Brett!