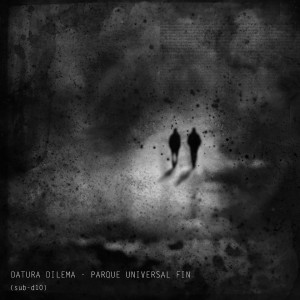 When a new artist comes with a 76-minute album it warrants some attention. Datura Dilema is hailing from Valencia and has produced ten cuts of dubbed out and droning techno, released digitally on the Spanish label Subsist. Given strong track record of Semantica, Prologue, Zooloft and other outlets releasing this type of music it’s a serious challenge. Especially when the peak of this sub-genre fell on the year 2011.
Unlike many albums, “Parque Universal Fin” gets better closer to the end. Opening tracks like “Crater” and “Gas Espiral” prefer to stick to stereotypes and don’t stand out from the bulk of similar releases. Thereafter  the compositions gradually become more impressive. “Sistema Orion” is already a serious tool making exposed to centrifugal force, although feels shortish with five-plus minutes, while “Planeta Azul” moves in synthetic dreams. Then “El Lado Obscuro De La Luna” prints giant steps on lunar dust in action-packed ten minutes of throbbing bass and alien effects. This is a damaging interplanetary trance worth to be released on vinyl. The selection for lighter moments would be „Gira Sol Gira“, shuffling tech house-flavored cut, and “Asteroides” with hints of acid. Tenebrous voice samples in “Analisis Espacial” turn the thing quite mental for the conclusion. A rather ambitious debut by an artist with concealed identity.