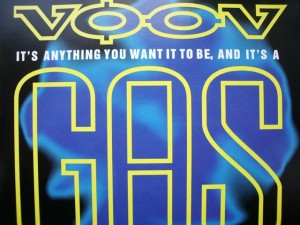 When I was reading “Der Klang der Familie”, a book about the foundations of techno and party scene in Berlin, it was the right time to recall some classics from the beginning of the 1990s. MFS, an acronym for Masterminded For Success, was an influential label back then, specialising on (hard) trance with acts like Effective Force, Cosmic Baby, Futurhythm, Microglobe and many others. As a result of the overkill a few years later, trance became a style despised by many, but in my view MFS and its artists made a huge contribution to the evolution of the European electronic music.

VOOV stands for Violation Of Ordinary Values and was a project by Christian Graupner, who was also a member of Futurhythm. “It’s Anything You Want It To Be, And It’s A Gas” is an memorable title and sounds like a manifesto for the gas mask generation.

The CD version contains five interpretations of the theme. The intoxicating intro of “Smoke Machine” invites to an ecstatic trip, to the world of mutated sound samples and rolling arpeggios, and “Strobe Light” adds a staccato of helium-treated voices. All valves are opened in “Oxygen Mask”, that grows to a bleepy and sweaty workout with UK hardcore influences. As a CD bonus, “3-D Trance” is overrun by a menacing and endless synth avalanche, which stretches the track to over nine minutes. All that is just pure fun.