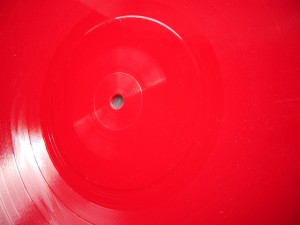 Greetings from Panzerkreuz, the doom department of Bunker Records. Penik Ettek is a true disciple of the padrones who once pulled the strings in Acid Planet and Unit Moebius and the acid project launched by Albert van Abbe and Paul van Gent gives full respect to the old school guys in organising a thunderstorm of acid lines.
Penik Ettek does not run for the award of the most complex acid programming and instead opts for simple, but astonishingly functional power tracks. A lot of straightforward 303 and 909 action paired with loud bass, whereas the low frequencies in A2 seriously go through the walls of concrete. Hardcore frenzy with a throbbing kickdrum is faced in B2 and distortions in B3 remind of Ra-X. A bleeding nose is promised, except in beatless conclusion of the LP.
The only downside is technical: The middle hole of my copy, and probably of entire edition, is too big, though does not affect home play.