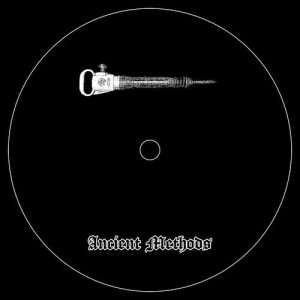 As it reads in the Book of Joshua, the walls of Jericho fell on the seventh day, after seven priests had blown their seven trumpets. The industrial techno engineer Trias, now a sole operator behind Ancient Methods, proclaims the time has come for the “Seventh Seal”, which might carry some underlying symbolic meaning. For the time being, the further agenda of Medieval-minded yet prophetic sonic warrior is unknown but the seventh installment of Ancient Methods series is again dark as night, encompassing sounds difficult to match. It belongs to a thinly populated category of records that I have decided to buy without any pre-listening and, as expected, no regrets came up on the delivery of this one.

Intense and captivating experience is launched with “Knights And Bishops”, a prime example of crushing industrial rhythms with eerie whispers and raw EBM-sourced riffs, while sharpened swords are crossed during a chase in a treacherous swamped area in “Kings & Pawns”. “When All Is Said And Done” begins with abstract noise before the EP’s dominating grinding sound sets in, assisted by a distant chorus. Rounding up the annihilating yet intelligent EP, “Castling Becomes Inevitable” is the hardest cut with an extra portion of hammer-and-anvil sound added, all appearing like a mixture of cyberpunked Kraftwerk and trimmed Nitzer Ebb. Most tracks are moving at 124 BPM but it just amplifies the impact of the pitch-black techno war funk by the quintessential act from Berlin.