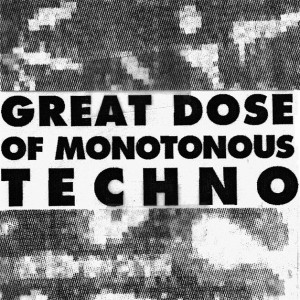 All these old school ravers and racers complaining about insufficient amounts of monotonous techno are well served with a great dose by the late Swedish artist Ü aka Joel Brindefalk. As a long-time affiliate of the Börft clan, Brindefalk has filled the LP with the sound of rave-era tapes from the attic, expressing both excitement and homesickness of bygone times. The Ü project boards a seasoned but well-oiled vehicle for historical sightseeing in the lands of techno cropped to two long tracks. Analog setup with intense rhythms and panting synths makes a nod to oldtimer labels like Labworks, Ferox and even acid trance of Harthouse, at the 11-minute-mark on the A-side. The B-side kicks off like ambient drone but becomes an ugly synth mayhem from the five-minute mark and later abstract notes strike before the gates are opened for pulsating acid session. Ü also interlocks to the raw sounds of Frak released earlier on Digitalis, a label that is increasingly pursuing harsh rhythms as recently proven with Prostitutes LP.