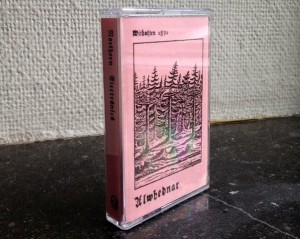 At the end of the 19th century, lumberjacks in Northern Sweden claimed seeing something deep down in the woods. They were as frightened as the new vicar with pale complexion, another eyewitness who left the remote village soon after that. They could not predict that the gloomy atmosphere of 1892 will be reproduced 110 years later by Ulwhednar, in Norse tales a warrior carrying wolf pelt in the battle. Now the Swedish electronics label Northern Electronics has excavated Ulwhednar’s pagan drones and cold whispers to give a lesson of genuine darkness rooted in the Nordic mythology.

The five-tracker is a macabre piece of slowly flowing minimalistic noise tied to vibrating hum and frightening roars from the distance. The catharsis arrives with the long last track bluntly called “V”, a more complex composition with abrasive synth layers over thundering orchestration. Be prepared for seventy minutes of doom.