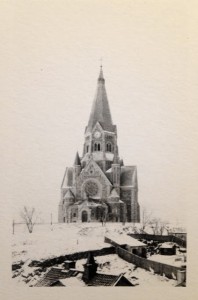 Defrosted demons lurking in the mid-winter kyrkogården like the subconscious woes in Bergman’s “Fanny And Alexander” when Ulwhednar is at it again, following the debut cassette and a LP in 2013. Out just before the Christmas, the six-track tape and digital release is another proof of Ulwhednar’s firm command of anti-wellness music but contains also traces of brightness.

Initially, soft-hued tinkling tones and subtle rhythms of “Midvinter 01” herald rather crisp electronics, but the beast is yet to wake up. The second track is a long, tormenting journey with low-frequency resonance feeling in the bones, built like an short-range noise weapon against intruders.

“Midvinter 03” advances in static drone spheres before flickering repetition joins the game in the next track, observing the sub-aquatic life through the thin ice. Blooming chords in “Midvinter 05” are inching closer to the moods of snowfall ambient in Ricardo Donoso’s style, matched by the last cut calmly descending from the Mount Analogue. Another mesmerizing piece of ice-cold explorations from Sweden, by Varg and Abdulla Rashim.