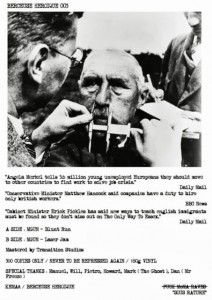 Launched in 2013, Berceuse Heroique is a vinyl-only label from London having already attracted an interesting set of artists. After Ekman from the Netherlands, to return soon with insane acid single, and Gesloten Cirkel from Russia, Detroit’s Manuel Gonzales aka MGUN has now parked at BH.
On the A-side he makes it simple when pumps up “Blunt Run” with a seemingly effortless kick drum, leading us through playful chimes and vintage house elements to a block party. On the flip “Laser Jam” is reminiscent of Newcleus or Arabian Prince, with vocoder charm and rudeboy vocals dipped in casual electro beats and oriental snake charmer horn. Close to MGUN’s electro joint “Jijijijij$ijijijiji” from the recent “If You’re Reading This EP” on Don’t Be Afraid, only disappointingly cut off before the three-minute mark.
As usual from the BH, it’s 180-gram black label, coming with a politically charged A4 insert. Despite of this 12-inch sounding a bit too basic, this label has got balls.