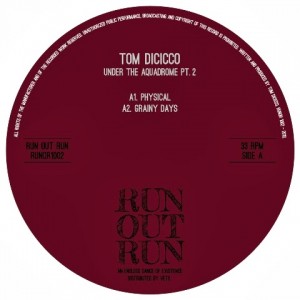 One of UK’s young techno guns, London producer Tom Dicicco launched his own Run Out Run imprint with a floor-friendly first installment of the “Under The Aquadrome” trilogy. The second outing mainly exhibits his dub-influenced side, with one remarkable exception.
After being tested on the floor, at home and in the car, the spell of the the opening track of the “Under The Aquadrome Pt. 2” is hard to cease. Rolling percussion on glowing sound sinusoids make “Physical” a track that deserves often-abused references to UR’s hi-tech funk and embodies The Martian’s best moments. Dubs move to the frontline in three following cuts where aquatic “Grainy Days”, by sound like a rainy-day-theme, stands out of the rest. On the flip throbbing “Excavation” and bright “Merk” continue travels in deep rhythms.