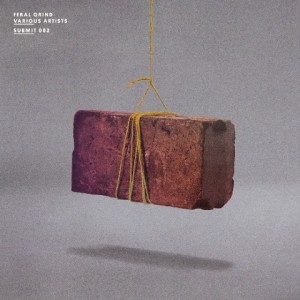 Perc Trax has been an emblematic outlet of the UK techno scene, being rough in its artistic approach when nourishing energy for the floor. Certainly allured by the electronic music’s industrial past, label owner Ali Wells aka Perc decided to delve deeper into the hard-edged experimental techno when launched a new sub-label Submit with a symbolic collaboration between Wells and Einstürzende Neubauten earlier this year.

Submit’s serious intentions are affirmed with an invasive compilation titled “Feral Grind”, where a glimpse at the artist roster flushes away any fears of encountering midrange techno.
In “Electric Bathwater – Beachboyswhenyoudie” the hairdryer is exclusively used for the electric shock when the Tennessee artist Housefire merges splashing low frequencies with hardened shoegaze and choral chant. After distorted EBM-approved amok in “Braces On My Fangs” by James A. Donadio’s Prostitutes, the unknown face behind Bleaching Agent strolls in scrapyard in “Yellow Corduroy Wall”, void of any beat assistance. Another provocateur Pete Swanson extracts a tampered bass line in “Pleasure Averse” and Trogpite applies filtered drum’n’bass in “Trogdog”, thus joining the sorcery guided by a growling voice Alan Vega could be proud of.

When grinding rhythms and nasty kick drum are hitting in Profligate‘s “Swarm” no one is standing at the wall anymore. What might be a kinky couple called Henry & Hazel Slaughter – in fact the zillionth alias of John Olson – expresses subdued rage in “Breather Fat: Take Four”, followed by noisy onslaught in “Final Love (Feral Love Dub)” by Burial Hex and Mincemeat Or Tenspeed‘s “Drooman”.

After a sudden rhythm change, “Face It Fast” by The David Russell Snake triggers body convulsions and “UX I” by Hive Mind touches the extremes of drone and bang science with a snake-charmer effect on the audience. Exclusive to the digital version, DAF bass line meets Sheffield school of electronics in “Lowest Temptation” by the Type recording artist Indignant Senility.

“Feral Grind” is a spectacular night out with distorted and crunched soundbites, from the artists hailing mostly from the (smalltown) America and confirms that Perc’s new sublabel has taken a very welcome direction.