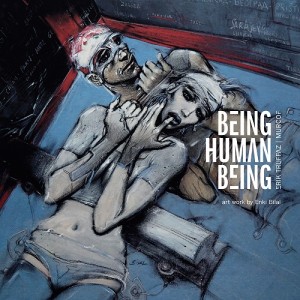 “Being Human Being” is a cross-genre collaboration of the French jazz trumpeter Erik Truffaz and Murcof, Mexican electronics producer. Not for the first time, as in 2008 they released the album “Mexico” on Blue Note and the same label features Truffaz’s numerous collabs with other artists.

The sleeve art by the graphic artist Enki Bilal is about humiliation and despair, with Sarajevo and Belgrade, Bilal’s native city, scribbled on the wall and reminding of hardships the Balkans have gone through in last decades. But the album, occasionally seeking the dark depths of the human nature, is not as gloomy as expected, expressing the hope of things turning better.

The album starts with melancholic intro “Origin Of The World” where Truffaz’s trumpet meets electronic, slightly oriental layers. Murcof unpacks the drone kit in in “Warhol”, filling epochal 15 minutes where not only trumpet but also keys maintain the jazz element in the composition. After brief “Hybridiation”, random patterns and free jazz rule in whirling “Chaos” and the next track “And Nina” features clarinet by Nina Truffaz.

Murcof’s electronic passages gain more ground but they go hand in hand with Truffaz’s instrument, like in “The Eye”, followed by the album’s most appealing composition “Human Being”, an entrancing piece filling the space with wellness. Closer to the end, thoughtful cellist draws a bow over the strings in “Skin” and cinematic “Infinite Abstract” means a passing to the far ends of the Universe.