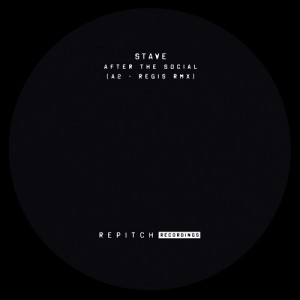 For me, Stave begins with the EP “Trust” on the Irish Trensmat, which now has sadly entered cold storage, as the label put it. The tracks were scripted in harsh machine language, including an outstanding remix by Israel Vines. It was in 2013, but Jonathan Krohn, a Chicago electronics artist behind Stave, was not a newcomer as his previous musical experience included experimental project Male with guitarist Benjamin Mjolsness, a band many people might not have heard about.

More familiar are the doings of Talker, Krohn’s notorious noise and drone venture with Karl Meier, that has been hosted twice by Downwards. Considering Trensmat’s material and Downwards affiliation, it is not surprising to see Stave landing at Berlin’s headbang gang Repitch.

The title tells all about “Hardened Chord”, a thoroughly distorted and pounding sonic violence in real time. For the remix, no one else than Regis enters the game as a kick drum fiend, letting abrasive synth riffs to mess with sick-minded and subdued narration. Next going nuts in “Circle Pit”, which is among the noisiest tracks ever heard on Repitch, where hazardous cascades of shredded sequences hitting the ground. However, my preferred track is the last one, “Paid Jazz”, less stormy than the preceding ones, but a real repetitive charmer underscored by loud drums and dark pads.

Compared to Trensmat release, “After The Social” is less experimental and aims directly at pure dancefloor madness.