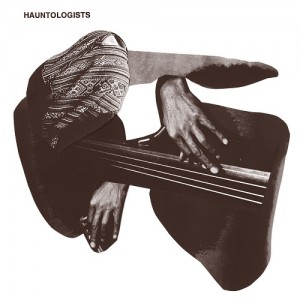 Despite of rare appearances on the self-titled label, the Hauntologists are a household name in the electronic scene. Two talented producers, Jay Ahern (aka Add Noise, Aquarhythms) and Stefan Schneider (in Kreidler, To Rococo Rot), started the project in 2008 and since then they have completed five EPs, two of them on Ahern’s own label Modular Cowboy.

The duo’s new signs of life are coming with the debut (mini) album, according to the artists rooted in African music and conveying vehement spirit of the continent’s native drums. However, the result of the studio rituals can be described as ‘intelligent electronics’ with a hypnotic percussive edge, and certainly not as tribal music.

Two post-minimal minded cuts, “Howl” and “Point”, constitute the warm-up phase, being both glitchy and acidic to lend the necessary push to proceed. My bets will be on the next tracks: By “Brooklyn” everybody is awake to face snappy electric boogie, where ample rhythms clash with acidic dissonances. Modular sequences and hi-hats wind up “Wistful”, a bubbling and chirping piece sounding like an intro going out of the control.

“Hush” returns to micro beats of the A-side, with vocoded and chopped voice effects and wriggling 303. After stomping but somewhat stiff “Suspend”, another goodie sits at the end when “Hannett” collects the best bits from the story so far, offering a rich sound palette obscure clicks and snaps with rhythmic variations.

The vinyl version has only seven tracks, but when we add four digital bonuses, it will be good for a full album. “Hauntologists” speaks of the duo’s abilities and experience, but I would have expected more trippiness of Cheap & Deep Productions, roughness of Add Noise – in addition to the primal percussion of Diskant artists.