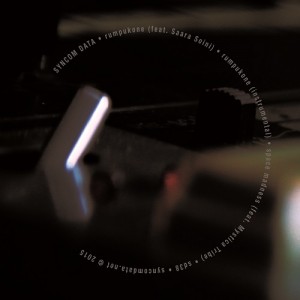 Looking back to a string of releases on Bunker and their own SD Records imprint, Syncom Data is having a remarkable year 2015. After issuing a warning with “Warehousing“, the Dutch act of Jan Katsma and Raoul De Vries keeps stimulating primitive urges with the new EP “Rumpukone”.

With a rate at 128, both the vocal and instrumental version don’t compete in the BPM race, but they carry potential of a full mental blackout without any substances. For anybody despising all kind of mind poisons, “Rumpukone” is a perfect tool how to get high on music.

Syncom Data’s action kit comes with hysterical recital by a lady called Saara Soini, who in the psychotropic title track expresses deep and sincere affection for the drum machine, doing it in her native Finnish. Witnessing the riot girl’s moaning on bass distortions and metallic effects, it is useful to know that according to the artists the source of inspiration was “Me and My Rhythm Box” from the 1982 film “Liquid Sky”. Perhaps because of Finnish affiliation, the title reminds of Tekonivel’s and Panasonic’s shuffled compressor beats too.

After “Rumpukone’s” instrumental part, Japanese artist Taka Noda aka Mystica Tribe joins the team to stir up “Space Madness”, for exactly 8:08 minutes of sci-fi vibes on the B-side. A showdown of machine soul, it could be a theme tune for abduction theories.

Syncom Data has been an exciting act hailing from The Hague, essentially after Bunker’s notorious compilation “Stalingrad Vol.1 – Das Beste Stahl“. On the home label they have put out numerous goodies, along with Louis Guilliaume, Roswell Return, Nukubus, Ovatow and other trusted players of the SD stable. Now “Rumpukone”, meaning ‘drum machine’ in Finnish, is poised to take over the sweatiest club locations, and not only in the country of a thousand lakes. Get it.