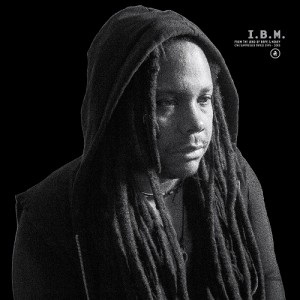 Electronic music’s foremost Afro-futurist keeps up the connection to Interdimensional Transmissions: Ten years after the label debut as I.B.M. (=Insane Black Man), Jamal Moss reappears at the Ann Arbor squad under the same alias. It turns out that Moss had something to hide back in the days, because the double vinyl “From The Land Of Rape And Honey” is collected from a number of lost tapes covering the period from 1995 to 2005, meaning that for some tracks it took about 20 years to get released.

Sometimes ‘unreleased’ or ‘forgotten’ stand for leftovers that are expected to give an extra push to an artist’s ailing career. For Moss, it is definitely not an issue because of his prominent position in today’s electronics. What’s even better, the album-length material of 10 tracks spread over 60 minutes does not really have any weak spots.

The Chicago madman’s compelling ride combines his first-hand experience from Ron Hardy’s Music Box and harsh industrial sounds from decades ago, sort of amalgamation that bars the entry into the comfort zone. I.B.M. is ruling over a promised land of intense drums and distorted provocative funkiness and all compositions.

There is plenty of action between the first and last tones of the album. Just take metallic slo-mo convulsions of “2nd Soul Of The First Body”, vortical Poindexter-style assault “A Madness Shared By 2”, experimental jazz & swing theme “Sanctification For The Heathens” or dry bass abstractions in “Ministry”.

‘There is no blackness or whiteness in music’, Moss once told in an interview for Wire magazine, but the presence of the spirit of African natives appears in many parts, like in the wild, thoroughly distorted rites in “Tribal Retributions”. “Bless The Mission And Toil” comes with a strong Liaisons Dangereuses feel and “Babel” features shrill acid distortions we haven’t heard since Paul Birken’s “Acid Youth Of Malibu”.

It’s all about a roaring lion.